Acts 3:
1 One-day Peter and John were going up to the temple at the time of prayer-at three in the afternoon.   2 Now a man who was lame from birth was being carried to the temple gate called Beautiful, where he was put every day to beg from those going into the temple courts.   3 When he saw Peter and John about to enter, he asked them for money.   4 Peter looked straight at him, as did John. Then Peter said, “Look at us!   5 So the man gave them his attention, expecting to get something from them.   6 Then Peter said, “Silver or gold I do not have, but what I do have I give you. In the name of Jesus Christ of Nazareth, walk.”   7 Taking him by the right hand, he helped him up, and instantly the man’s feet and ankles became strong.   8 He jumped to his feet and began to walk. Then he went with them into the temple courts, walking and jumping, and praising God.   9 When all the people saw him walking and praising God,  10 they recognized him as the same man who used to sit begging at the temple gate called Beautiful, and they were filled with wonder and amazement at what had happened to him.

Read chapters 3 and 4 of Acts to enjoy this real-life story of beggar of over 40 years who was healed by the Holy Spirit through Peter and John. We could write a whole book on this story, but today I want to highlight some aspects of this story for our encouragement and to examine our ways so we can live in and through the Spirit bringing life and joy to the ones that the Lord brings into our lives.

This man begged every day in front of the temple gate called, Beautiful. Not a beautiful sight, but I think folks got used to seeing this man sitting there every day. Perhaps some of his family/friends brought him to the gate every morning and carried him home in the evening.  He made some money for himself and his family from begging. Not sure if he ever entered the temple, but he was always outside at the gate every day. That one evening was different.  When Peter and John were walking into the temple around 3 PM, this man as usual, without even looking up at them, put out his hands for some alms, he heard Peter say, “look at us.” Peter, confessed to him that they did not have money, but they had something even more precious and were eager to give it to him. In the name of Jesus Christ of Nazareth, they healed the man who was lame from birth. He was ecstatic, the Word says, “he jumped to his feet and began to walk”, he did not sit down again to beg, but rather went with Peter and John into the temple. All the people in the temple, recognized him as the former begger and the Word says they were amazed. What a story! I hope we get to meet him in heaven and relive that story.

Don’t we want some of our friends outside of the temple gates to enter in? Do we wish that some of the folks we meet daily will worship with us? This only happens if we could get them off what they are seeking and give them Jesus! I urge each of us, like Peter and John who were led by the Spirit, pause for people calling out for help and give them the best gift that we can ever give – Jesus! 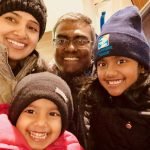 Donald Thampy has been a member since 2014 and serves as a Ruling Elder.